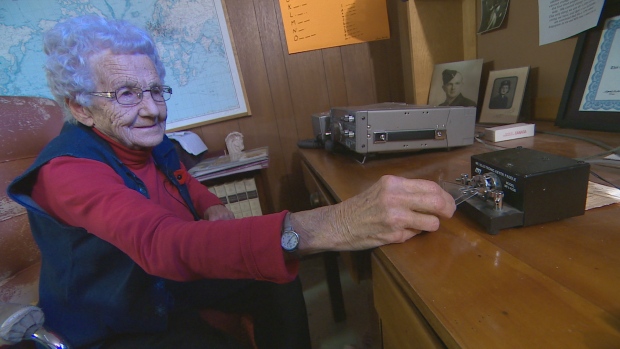 “We might live in a world where knowing how to write code is gold, but for 93-year-old Merle Taylor there is only one code: Morse code.” Colleen Jones, reporter for CBS news.

Merle Taylor, at the age of 20 years old, signed up to help in any way she could during WWII.

When she originally attempted to sign up the only jobs for women were cooks, drivers or office workers and she wasn’t interested in any of those positions.  She had been very inspired by her Uncle Sandy Horne, a wireless air gunner killed in action Christmas Eve 1942.

All the wireless gunners were becoming less and less, so the ‘powers that be’ said well, ‘We’ll take the men who have the radio wireless training and we’ll train them to be air gunners and we’ll take women into Morse code and they can do the groundwork.'”

She trained many young servicemen in her own home in Nova Scotia.

“There were 59 airbases built across Canada to accommodate the boys from England, Scotland, Ireland, New Zealand, Australia and Canada. It was that group of boys that I taught Morse code to,” Taylor said while sitting in her basement outside Antigonish — where she still taps out Morse code.

I believe that today as we honour and remember all the brave men and women who served and who perished in both WWI and WWII, I also want to honour this lady, Merle Taylor for her amazing contribution to the troops.

This site uses Akismet to reduce spam. Learn how your comment data is processed.